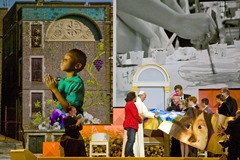 The City of Philadelphia Mural Arts Program created a beautiful new mural, “The Sacred Now,” in honor of the September visit of Pope Francis to Philadelphia. Artist Cesar Viveros and some children presented Pope Francis with the final panel and he signed it, “Francis” to become a permanent part of the mural, created in partnership with the World Meeting of Families. CNN commentator Bruce Feiler talked about the mural during the live presentation.